The Baines group of companies dates back to 1947 when seventeen year old John Baines built his own truck from an ex-world war II Blitz vehicle.

The Baines group of companies dates back to 1947 when seventeen year old John Baines built his own truck from an ex-world war II Blitz vehicle.

His company grew in many directions, concentrating on haulage of bulk materials including coal, coke, sand and aggregates.  He diversified into motor vehicle cartage between Sydney and Wollongong.

The company’s focus through the 1960’s and 1970’s was on plant and equipment hire, including initial civil works for Westcliff Colliery, civil works for other collieries, and winning sand and clay for local brickworks.

By the mid 1970’s, John needed larger premises for his growing fleet, and purchased land at Woonona from Bulli Brickworks.  A few years later in 1978, with the help of good friend Dave David, John moved into concrete manufacture at the Woonona site.   With the success of this venture, and seeing the need for a local manufacturing plant at Helensburgh, he built a new factory there.  Both operations have been in continuous operation since then.

In 1982, he purchased the fledgling masonry operator Colorstone at Appin, to which he added a further pre-mixed concrete plant.  Over the past thirty years the masonry operation has grown into a highly automated competitor in the New South Wales market, supplying a blend of masonry, paving and its own   patented range of retaining wall blocks.

The same high standards of product quality and service are a hallmark of the Baines Masonry operation, and a reflection of the standard set by John.

The Baines group of companies remains essentially a family company, with three generations of the Baines family actively involved with its businesses, as well as two generations of a number of its early employees. 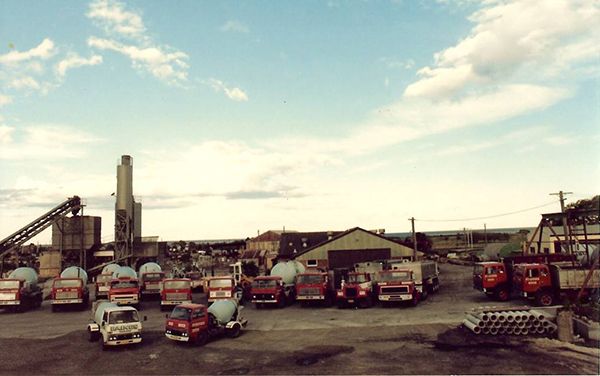 Our last forty years of history has established us with a strong reputation for high quality concrete and exceptional service.

With an average length of service of  20 years, we guarantee consistent service and product quality.

We use the best locally sourced materials to ensure high quality concrete is delivered everytime.

We are a 3rd generation family business that values the long term relationships we create with our customers.

We are a local business born in the Wollongong area. We are an Australian family company.